The "Ring of Light"

This was an experience that occurred back in the Summer of 1980, around the end of July. My brother's and several of their friends came up to go camping for the week on my property. They set up a campsite located at the edge of the river several hundred feet behind my home. The area near the river is quite secluded, serene and beautiful.

It must have been around 8:30 approaching 9 P.M. as twilight was waning to its end. It was a clear night with many visible stars. I had brought my flashlight with me to find my way on the long path down. When I reached the campsite everyone was in a fun mood enjoying themselves around the campfire. These were eight young men in their early twenties and with myself present a total of nine adults. It must have been approximately a half hour or so, after I arrived, totally dark now and very quiet. I can't remember who saw it first but someone exclaimed, pointing up directly above us,"what the hell is that"!

We all looked up immediately, and now, with the exception of the soft crackling of the campfire, a dead silence permeated the campsite. Just above the treetops was a huge, white, "ring of light". It was oblong in shape, approximately 50' - 60' in length and 30' in width, and appeared very similar to a "smoke ring". As an observant artist I focused myself intensely to absorb as much visual information as I could. The center of the ring was empty and you could see a few stars. The band of the "ring" was perhaps 4 - 6 feet wide, made absolutely no sound and did not shift its position in any direction, like it was engraved in the night sky. There was however much movement happening around the inner and outer bands of this "ring of light" . Hundreds of triangular shaped, white lights, of different sizes, pulsated erratically around the inner and outer edges. There was no set rhythm or pattern to these triangular lights and they seemed almost hypnotic. There was also no visible sign that this was any kind of solid object or metallic in nature, it felt and appeared like pure energy and not something organic.

We were all mesmerized and just stood there watching, gazing up with our mouths agape for over a half an hour. I was several years the elder in the group and gradually became concerned for everyone's safety...what was next a mass abduction? I had never seen anything like this before so I coerced the group to follow me back up to the house. They were ready and it didn't require much effort on my part. Afterward some of the witnesses in the group said the "ring of light" followed us back to the house. I have no memory of that as I was preoccupied keeping myself focused on the path with my flashlight. I should also note here that this camping trip was the second attempt by the group. The previous year, making the same journey, the driver of the vehicle fell asleep and the vehicle rolled over 3 times into a ditch off the highway. No one died but several within the group were hospitalized and all eventually recovered.

I have not seen this "ring of light" again but this unique experience initiated my interest in the ufo phenomena. When you have this type of encounter there is a paradigm shift in consciousness that changes your life forever. 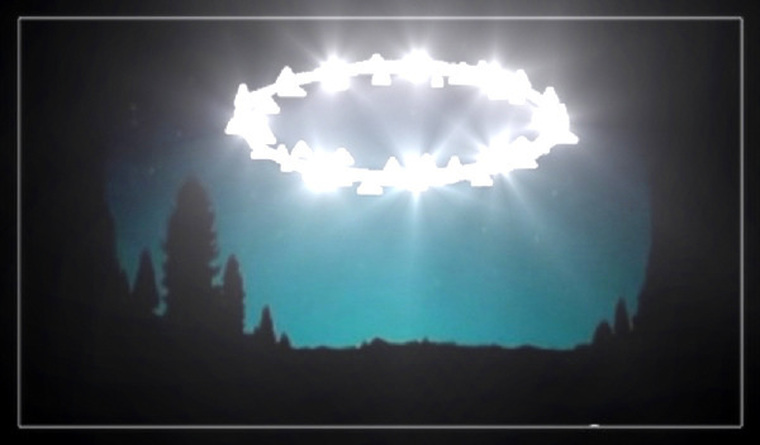